Since the 1860’s Ashland enjoyed popularity as a ‘resort community serving those weary of city life. In 1868, Randolph-Macon College relocated from Boydton, Virginia, and purchased the Ashland Hotel. That hotel was used for student housing as well as a site for school functions. The Ashland Hotel burned down in 1905 and was rebuilt as the Henry Clay Hotel in 1906. This second hotel was located just north of today’s location on Center Street. The hotel served the community and college until it too was destroyed by fire in 1946.

The new Henry Clay Inn re-opened in 1992 and was built in a similar style as the earlier buildings, with wide porches and verandas, and nearly in the same location, just behind the train station. The Inn continues to serve local residents as well as visitors to Randolph-Macon College, Ashland  and the entire Richmond area. 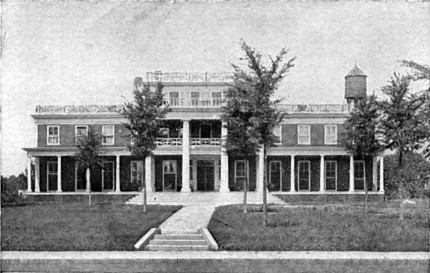 The Henry Clay Inn advertised “Cool Rooms, Spacious Verandas, Artesian Water and Railroad Facilities Unsurpassed” all at the rate of $2.00 and $2.50 per day. Photo shows the original Henry Clay Inn, which burned down in 1946.