On February 5, 1903, Hanover National Bank of Ashland was established in Ashland, VA (according to bank history records maintained by the FFIEC). Hanover Bank’s first home was a little frame building erected north of Thompson St., near the post office. 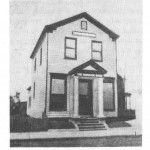 It was Hanover County’s first bank.

In 1919, the bank built an impressive brick building at 103 North Railroad Avenue in the latest Beaux Arts fashion, complete with paired columns and a classical arched window.

The bank was so proud of their new building that a fine pen and ink drawing was printed on their checks during the 1920’s (below).

The bank was acquired by First Virginia Bank in 1985, which was then acquired by Branch Banking and Trust Company of Virginia (BB&T) in 2003. No longer home to a bank, the distinctive Hanover Bank building is still a landmark on the tracks in downtown Ashland, providing unique commercial office space.